I am busy re-acquainting myself with the delights of the moveable breakfast. If ever you should want a good mood improver then try popping mulberries. Their sunny flavour seems to me the essence of every red fruit you've eaten, simmered for a month and then repacked into an explosion of taste. There's something essentially decadent about starting the day with something so well…. delicious. A bit like starting dinner with chocolate mousse, except with mulberries you can taste the vitamins zinging. 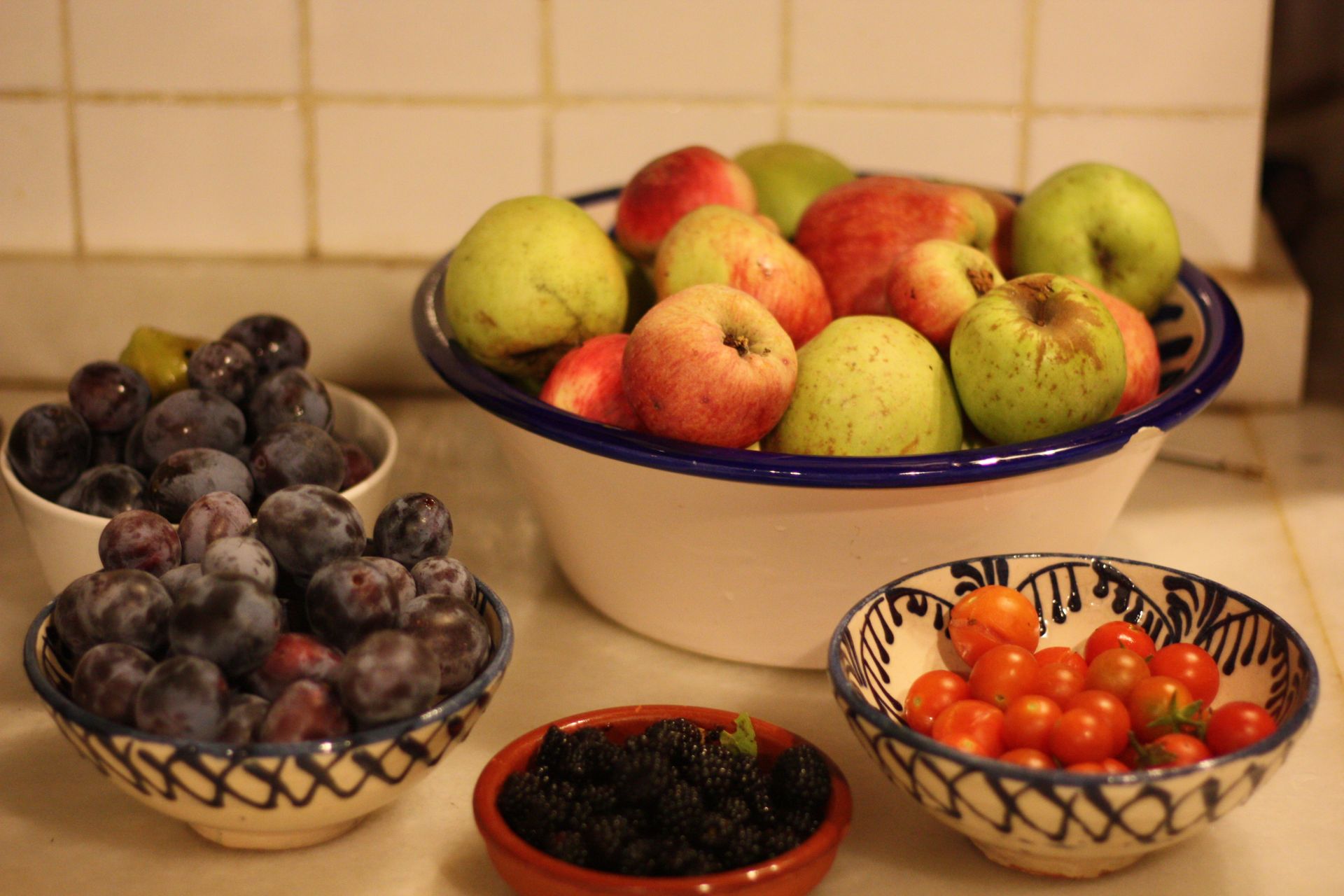 This is all thanks to our black Labrador Molly who, now a dignified but rather portly eleven, isn't up to much more than the gentlest of morning walks, especially in summer. So in these long warm months instead of a long invigorating route, the way we go is the equivalent of the perfect revolving sushi bar , though it's the two of us that are doing the revolving and the food, in place of sushi (even I draw the line there) is foraged.

First course is berries (see above) . Whilst I balance on a large fruit-splattered stone, Molly takes a rest in the purple shade. I know the tree intimately now so can stand confidently and reach out only for the fruit which local knowledge tells me will be perfectly ready. This is not because mulberries change colour like blackberries – or indeed most fruit as they become perfectly ripe – no nothing as simple as that. But because those which are black but not quite ready will squirt as you pull, like an octopus with her ink, refusing point blank to come off the tree and thus, day by day, I build up a map of the tree dividing it into zones of ready fruit and reluctant fruit. As a dedicated fruit lover I am not to be put off easily by a bunch of stroppy berries and instead continue to research diligently, and suck my blood red fingers clean whilst musing on the pros and cons of food that is itself opinionated. How would it be, for example, if dippy eggs spat at you if their yolks weren't done to perfection or a steak gnashed its teeth when left in the pan a second too long? 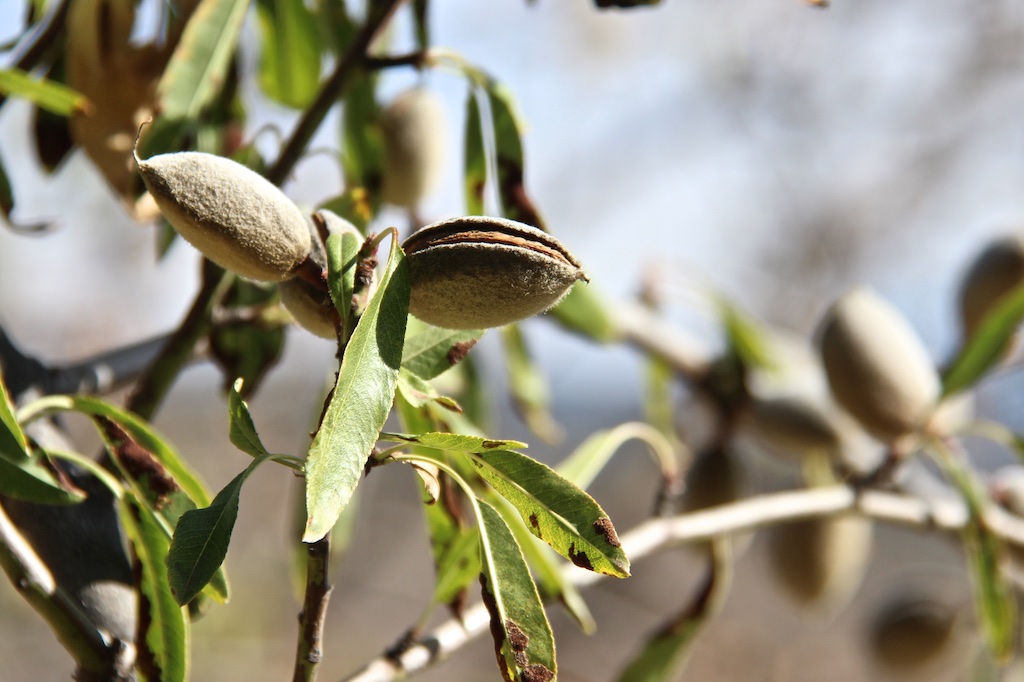 Grabbing a handful of mulberry leaves, which according to the villagers is the most effective hand cleanser for mulberry juice, we walk up past the seam of fairy rock. (Actually haemotite if you want to be more scientific, but as it flickers and winks along your route like natural cats'-eyes there is something of the sprite world about it, so the family name of fairy rock seems more appropriate somehow) We move quickly on to a young almond tree whose fruit is already scattered on the path, all ready for cracking between two stones for the perfect milky nutty mouthful. Time to digest a little, then, and admire the views whose pink-tinged morning light is paling as the sun rises, until we stroll on to fig alley, where the ancient wild trees have grown out over the path to create a cool figgy tunnel. Here you can reach into their dark canopy to retrieve the small white figs which are used for drying in these parts (as opposed to the larger purple horquinas which are sweet but more watery.) Picked just as the white green skin is starting to pucker, these higos are dense, fructosy and sticky with a pale pink fibrous centre which when torn open looks like some exotic flower.

But there is always something else to add another layer to this hedonistic start, apart from the food. A bit like the conversation or a favourite piece of music between courses. This morning, as the bee-eaters played rainbow coloured hide and seek in the blue pool of the sky I heard singing from the fields. It was our neighbour, Juan , in fine voice, surprisingly light given that his normal speaking voice is delivered with such diaphragmatic power that he sounds like a jolly tuba. He was hidden in the forest of bamboo cane struts and runner bean plants that now stretch out behind his mother's cottage, and the pile of empty crates by the track suggested he had a long morning's picking ahead of him. His wife Lola was with him though I couldn't see her, but just hear her voice. I was told yesterday that her elderly father had died whilst we were away on holiday, and I have yet to give her my condolences. As she was hidden from view I resolve to pop round to her house to speak to her later. As I moved on I was pleased to hear her husband singing, to her I like to think, and even more pleased to hear her laugh as his steady patter and gentle banter punctuated his song across the fields. 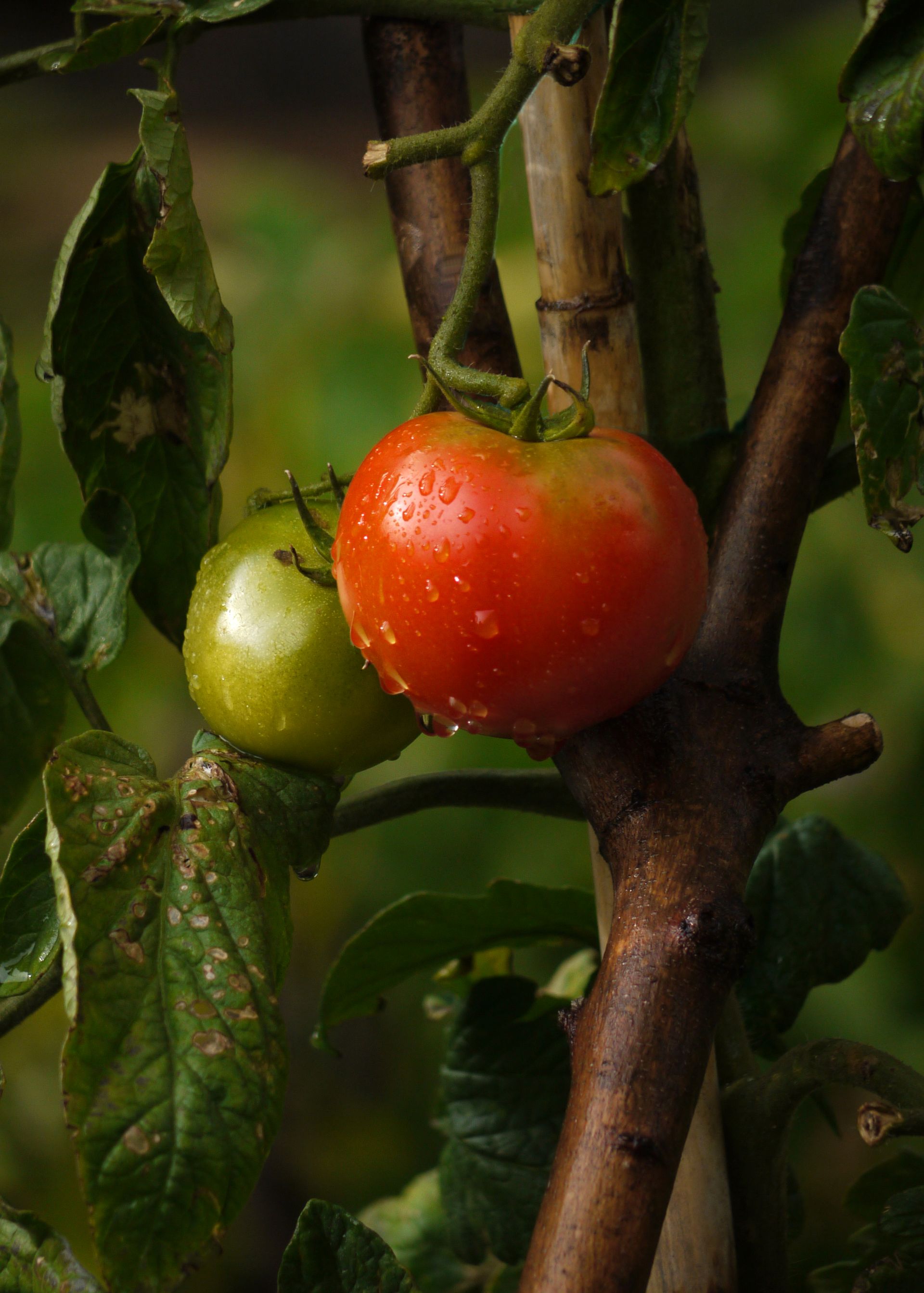 So on we walked, past their white mastiff who trotted over to greet us, his stride jaunty as he enjoyed the early cool air. As the two dogs sniffed each other inquisitively I smiled at Bear dog, as we like to call him, as his colour and shape give him the look of a fluffy polar bear. He is fully grown now, with a teenager's gangly limbs, but his funny square face and doleful pink-tinged eyes still have that puppy what's-going-on expression which he wore when small enough for Alba to carry around in her arms and bottle feed. ( Though let's be clear – it was Molly looking inquisitive – Bear-dog just doesn't do inquisitive.)

So back home after a month away it isn't too hard to be reconciled to so-called normal life. I do have quite a lot to do like everyone just back from holiday, but that's ok. If time at the computer gets a little wearing I have plenty to distract me. Perhaps I can extend the idea of a moveable breakfast to a moveable lunch. Stroll down past the fountain and on to the finca, grazing on grapes and early walnuts as I go. Or perhaps an on-the-move salad. Everywhere you look there are fresh green peppers, cucumbers and tomatoes winking on the vines. The weight of our own cherry tomatoes are starting to make their bamboo frames sag like an aged mule's back, in truth we have more than we know what to do with – that is, if Tom and his best friend Giovanni are not let loose on them too often. Yesterday I saw these two hungry growing eight-year olds abandon their bikes skew-whiff by the veggie patch and spend a full wordless ten minutes eating cherry tomatoes in a red blur as fast as their dusty fingers could pick them….

And then there would be dinner. This would have to be gathered on the move and then cooked later, at leisure, as even the most ardent raw food connoisseur would be stumped eventually as to how to enjoy grazing on limitless courgette flowers and uncooked aubergines. Perhaps not?

So yes. Late summer and early autumn in Mairena. A moveable feast. Now where have I heard that phrase before…?