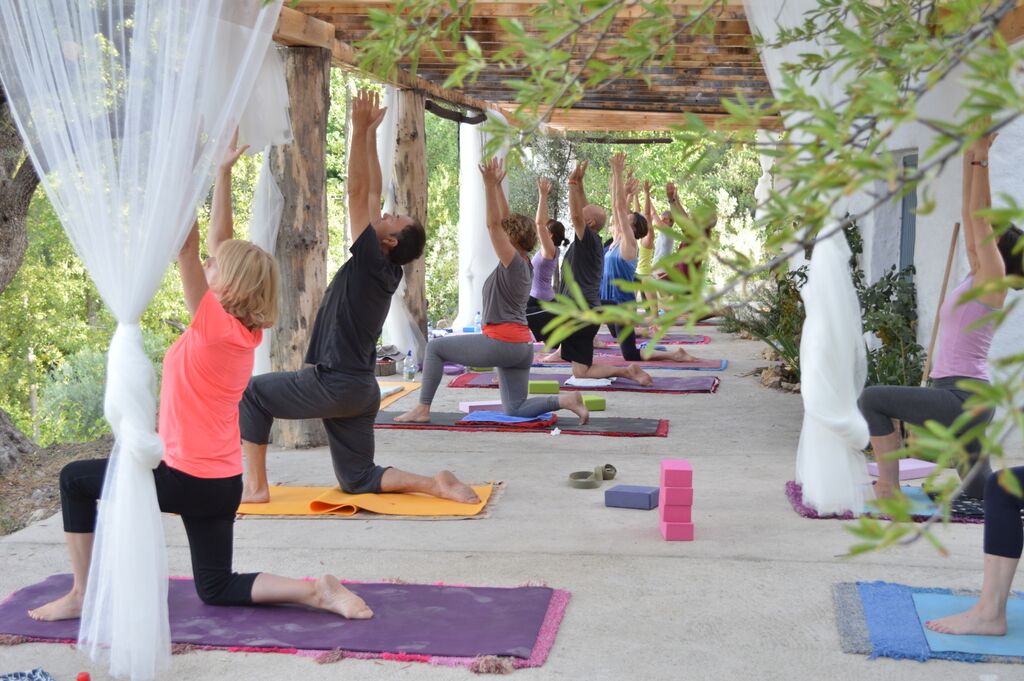 Confessions of a reluctant yogi

Let's be clear about one thing : As a Northerner, a Lancastrian at that, I feel that it's part of my birthright to be able to maintain a position or bear a grudge which is completely devoid of all intellectual or moral foundation. Passionately, vindictively, eternally. That's just the way we do things up there. Or maybe it's because I'm a man. Or I don't know, a human. But let's just say that over the years I've acquired enough basic self-knowledge to suggest that perhaps not all of my firmly held convictions would stand up to much scrutiny …. though I still cherish them, of course.

A haughty disdain for brown bread with walnuts on , for example, which is so clearly wrong-headed that I have refused ever to taste it. You see, the ability to hold an irrational contempt for the most mundane of things is often prized as a positive character trait, especially East of the Pennines, and I have a friend whose rancor and antipathy to any gravy made south of Sheffield represents a preposterous dogmatism, nay faith, that I can easily understand. The absolute need for cricketers always to wear whites would fit this absurd attitude, as does the complete certainty that Coronation Street is so much better than Eastenders, though I've never seen either. Or anything to do with darts.

Or, for that matter, yoga, which until recently I respected about as much as the Shopping Channel, being more or less inoffensive but best left to the crackpots with too much time on their hands.

Because for a long time I knew, just knew, that deep down there is something essentially dodgy about the whole yoga caboodle. Something, you know, a bit too right-on that sits like a cloud of lentils above the entire business. Or not so much above yoga per se as its followers, perhaps. And as for all that crass, evangelical zeal to share the benefits with you ………grrrrrr.

The same would be true of say, fox hunting. I'm sure there are proper arguments for and against which needn't trouble us here , but would you really want your children tally-ing ho like that, in riding pink, whip and jodhpurs? Seriously? Or have them among the numbers of those lost souls who arrive in costume to attend Star Wars conventions. Hmm. It's all perfectly harmless -unless you're a fox – but there's still something a bit rum , something that sets your teeth on edge, about the sheer earnestness of it all.

So there I sat, legs firmly uncrossed, unlotussed. An unbendy bigot. An anti –yogi. Until something happened. Out of nowhere came this ….this what, this revelation . Yoga fell into my lap and…..

Reader, I married it.

Just like that. Against all my better judgment I was persuaded to participate in a session one early June morning , and went and suffered a good old –fashioned coup de foudre. Bingo, as they probably don't say in proper yoga circles. Karma ! still doesn't have the right ring to it, I'm afraid.

Needless to say I wouldn't admit it for a while. A public changing of the mind doesn't come easily to a fellow from Preston, if ever, and has to be handled with great delicacy. First, I had coyly to admit that yeah, it hadn't been too bad , when in fact the whole thing had been wonderfully, improbably brilliant. Also, I had to deal with this weird thing which involved putting on stretchy clothing and huge physical effort and which was therefore to my mind a sport, but which eliminated all aspects of competition. Eh? Previously, whenever Emma had returned toned and happy from yoga , I'd always wanted to know who had won. I had a lot to learn, apparently.

Meanwhile, imagine my surprise when I saw that everyone, teacher included, was completely normal ! I'd expected lots of embarrassing chanting , bonkers discussion of muesli and the importance of being kind to worms and so on. None of that. Instead there was just the regular giggling and idiot chat that I so enjoy. And lunch was pizza. With red wine. We never have pizza and wine at lunch. Amazing.

Pizza notwithstanding, the real eye-opener was the immediate physical high I got from the experience. Somehow I hadn't quite anticipated that you can get the same endorphin-laced buzz that you get from a run or a game of football, yet without the bruising and muscle tear, so that not only can you walk without feeling stiff the next day, but can walk more easily.

Which has helped greatly, since after years of skiing and windsurfing abuse my knees are what the medical world refers to as knackered. Several times specialists have suggested that the answer might lie in surgery, though I've always resisted due largely to the negative experiences of certain friends and to a highly evolved sense of personal cowardice in the face of potential pain, but now, two years down the line after first starting yoga, I'm just so much more mobile.

In truth I'm still a complete novice. I get up most mornings and do a half hour session, just enough to feel sufficiently limber that I can stand wobbily on my head for a few minutes, something I would have found hysterically impossible not too long ago, but which tells me that if I can do this before breakfast, I can face the world. It's not by any stretch (pun intended!) proper yoga, but a series of imperfectly-remembered manoeuvres that I can manage without discomfort. But I tell you what: it's sorted out my knees, improved my posture and made me calmer. Sometimes, adds Emma. But after such a volte-face it's also reminded me that you can teach new tricks to old dogs (me, that is, I'm not being unkind, woof) and meanwhile has forced me to re-evaluate my attitude to change generally. I'm not quite yet ready to face walnut bread, but who knows?

So there you have it. That worst of all possible things, the evangelical convert.

Move with softness as my yoga teacher exhorts.

Or is it just going soft, as they say up North.