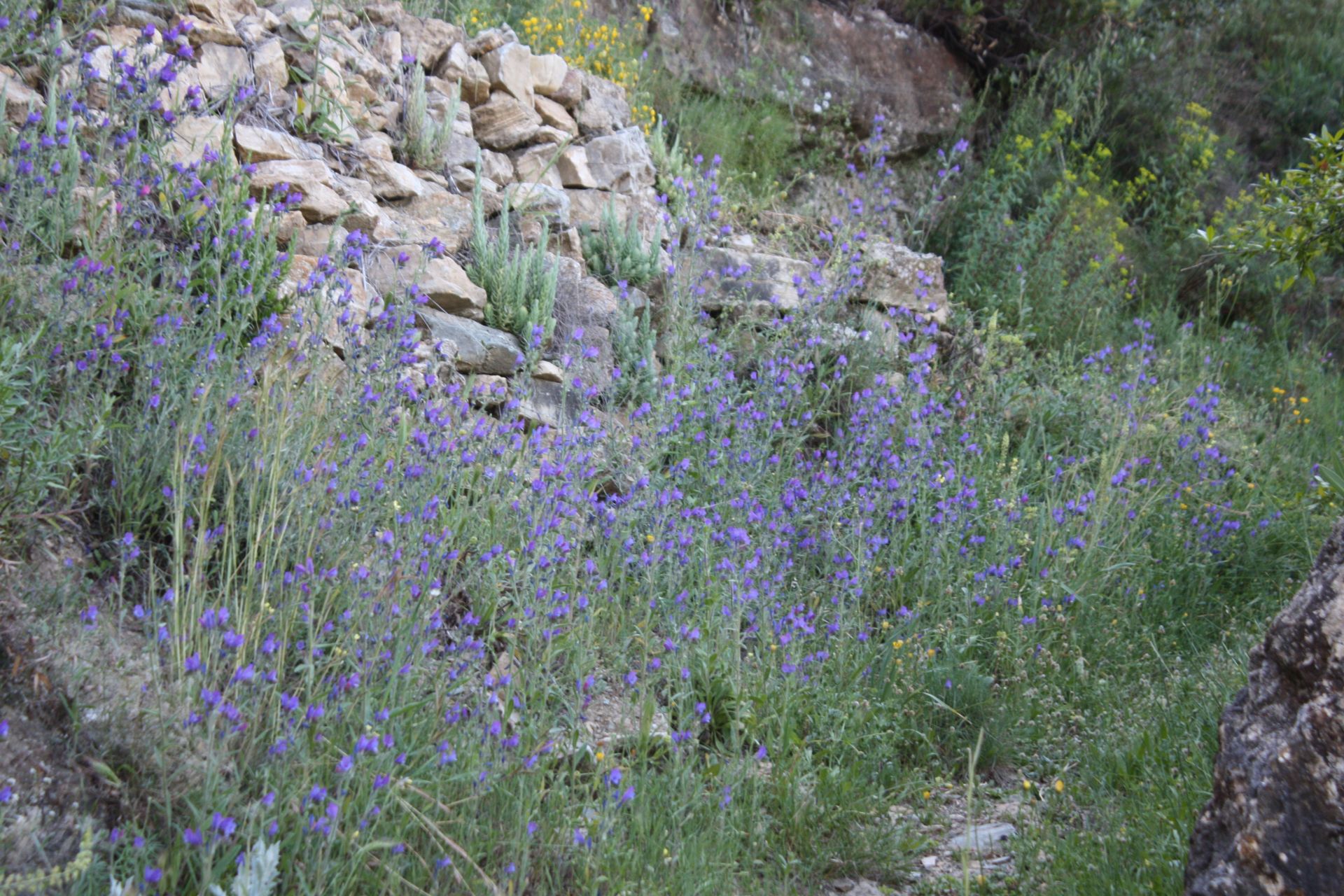 Emma: Reflections on a parade, with flowers.

It's pot planting time again. Maybe it was the arrival of the large white van, whose driver sells huge quantities of lupin, jasmine and margarita, which prompted the sudden rash of pot planting over the weekend, or perhaps simply the prospect of settled weather. Whatever, enthused by the general gardening spirit, we decide it's time to dust off our own tools and set to work on Las Chimeneas terrace and pool.

It was towards the end of the morning that I had a small epiphany. Stretching for a particularly stubborn weed I found myself engulfed by a helmet of wispy tendrils of wisteria flowers and, even though a hay fever impaired nose, the scent was astonishing. Ignoring the small army of thumb-sized black carpenter bees which seem to like hanging out on the wisteria's delicate purple blooms , I stood up, stretched and smiled. It was a great moment. After what has been for one reason or other a couple of difficult months, I stood with my arms sun-warmed and sucked up a great big lungful of sweetness. And with that it suddenly dawned on me with great pleasure– the good weather has arrived.

It's always some time in April that we get a first taste of summer. The first sight of bee-eaters is always a highlight – the flash of kingfisher blue as they flit between the telegraph wire, the poppies, the feeling of warm air on bare arms – and a firm favourite – sitting on still sun-warmed stone flags in the darkness listening to the distant hoot of our local Scops owl. And, of course, making sure I give a balanced view of what my aunt calls our small patch of paradise– we also see the arrival of the flies. They appeared overnight ( between April 8th and April 9th to be precise) dancing their infuriating zig zag dance and silently squeezing through even the narrowest gap and I wondered how we had ever forgotten them. So – yes – the flies are also here to stay along with the sound of evening cicadas and the baby geckos hiding out on the kitchen terrace wall. 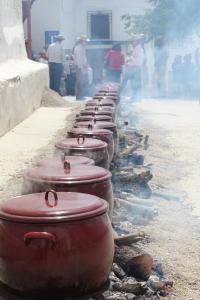 April is also the month for Mairena's spring fiesta, in honour of San Marcos, patron saint of our village and spiritual caretaker of the animals and all things agricultural. It's now over fifteen years since I first, somewhat shyly, took my potato peeler and joined the women preparing the fennel and pork stew in the annexe to the church. Each year it's the same ritual – the men tend the olive wood fires along the side wall of the church, about a dozen in all, and the women take charge of the great vats of simmering food. That first year I went to join the group of women busily stripping the thick thistle caldo sticks and peeling vast heaps of potatoes and sat next to Anita who must now be in her late 80's. We still regularly bump into each other as she comes daily to fill her jug at the water fountain outside our house and around the end of February or, sometimes earlier, she always brings up the fact that San Marcos and potato peeling will soon be upon us. To be honest I've missed the last two years of the preparations but she seems, pleasingly, not to have given up on me and as we go our own ways she still uses the now rather old-fashioned vaya usted con Dios or go with God. I find this strangely touching. 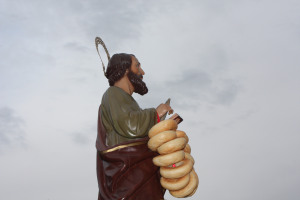 Hard work though it is there is something about this particular fiesta which is very special. First we process up to a specific, spiritually important but otherwise insignificant stone just outside the village, …… along with any animals (this year only a few mules) in order for the earnest young priest to bless the countryside. For this fiesta it falls to the women to carry the heavy saint up the road, gently rocking as they process to the stone font which looks out across the fertile terraces of the alfaguara below. Later we are given roscos or round circles of bread which bring good luck and then finally, around trestle tables you take along your own spoon and bowl for the stew. 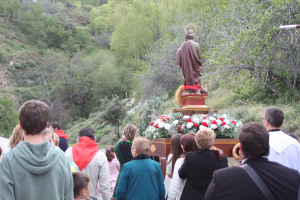 This year we didn't need the large black cloth suspended over the church doorway in case of rain but several years ago the weather was so bad we had to get the priest's permission to take the food indoors as the black clouds finally yielded a great big Alpujarran glush of torrential rain. Later as the sound of thunder echoed round the church I noticed a subtle change of mood as everyone shifted uneasily as they spooned up the food and perhaps more to the point, glugged from the communal bottle of wine.

So the first taste of summer is here again and as this evening Tom and I go and check out the chickens and watch the white donkey munch slowly through his pile of straw, his rickety back soaking up the sun's rays like a lizard I try in vain trying to stop rubbing my hayfever itchy eyes and find myself pondering the ups and downs of Alpujarran life. Winter in so many ways is grueling and part of you, however much you love the crisp days and long evenings with an olive wood fire, longs for summer again. But that's the thing in the Alpujarras. However hard the winter at least you know April is on its way and the intensity of the newly green grass terraces will soon be enough to make you sing. Yes, the return of the loveliness of summer seems hard earned this year but, if I had to put my finger on the essence of life in the Alpujarras maybe that's one of the reasons I love it : it is that very intensity of life here rather than some dream-like haven from real life. Indeed with its biblical rains, clear intense blue skies, cold winds that whip up from nowhere, scorching suns, flower-silly terraces and even the ear-splitting sound of the rocket of fiesta you somehow feel that you are getting a taste of life in all its crisp and varied colours. Maybe that's what it is –– a sense of distilled life or even life in high-definition perhaps. Black and white is okay or grey even, but once you've had a taste of hi-definition it's hard going back……