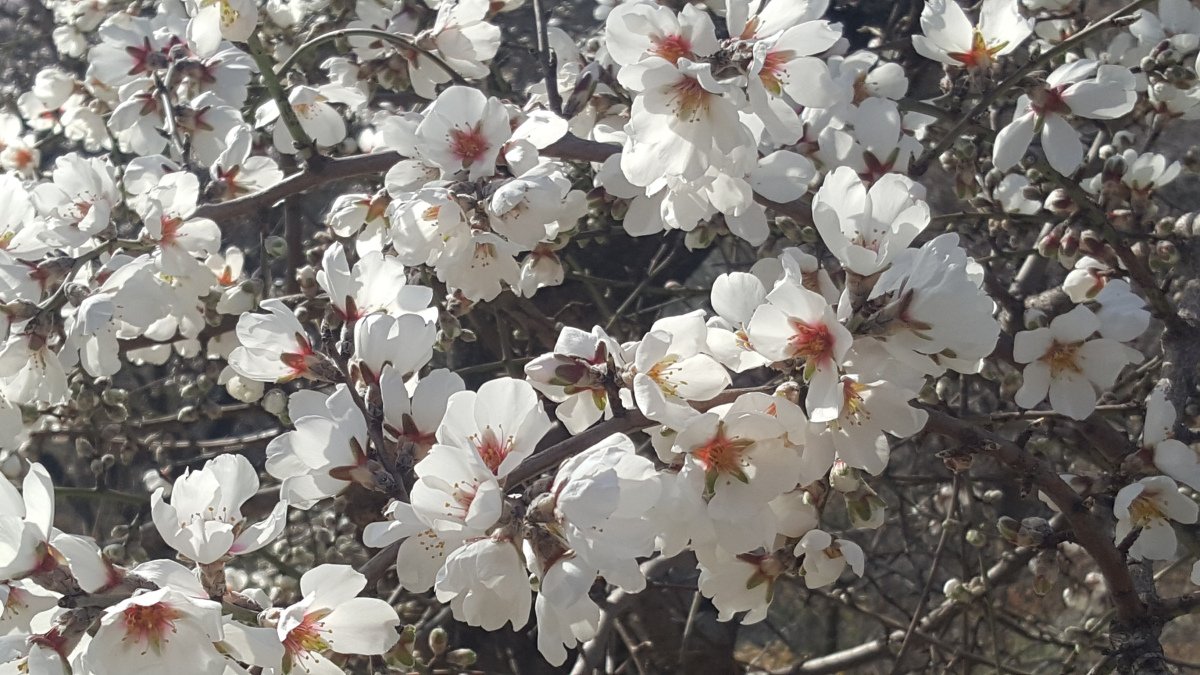 Confetti of the Gods

Let's consider again the almond tree. And what a fabulous, beautiful yet utterly dunder-headed bit of timber it is. Completely, ethereally lovely, yet in truth an apple short of a picnic, if you can forgive this arboreal mixing of metaphor.

For it's happening again, right outside our windows: the valleys are simply incandescent with the most gorgeous display of blossom you could ever imagine this side of Eden, and the poor trees, bedazzled and distracted perhaps by the magnitude of their own beauty, have failed once more to consult the weather forecast. And the snow is coming, together with the pitiless wind. And the trees, I'm afraid, are woefully unguarded, as dazzling and as foolish and as under-equipped as a sex-pot platinum blonde stepping out in (literally) killer heels to scale the Eiger.

Again! Year after year we're presented with this same ravishing, heart-rending spectacle as the gullible almond trees are led wide-eyed to calamity, seduced by a vindictive warm Spring that is perhaps jealous of their prettiness. You would think by now that they might wise up to such chicanery, but alas no, and like femme-fatale lambs to the slaughter they disrobe and are blown in their meekness to oblivion. 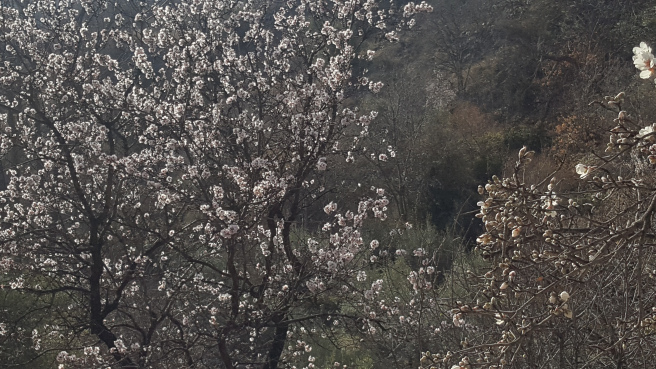 You see them naked in the winter, hard and gaunt, leafless and lifeless and black against the drifting snow, the whole landscape a monumental monochrome charcoal sketch. You admire them, skeletal and unyielding, and wonder at their tenacity, their hardiness. Imagine them as they resist the awful cold of the long dark nights, the freezing dawn, the frost-bound gales: it's heroic. These are muscular, stout-hearted, no -nonsense fellows.

And yet, and yet, as soon as the first mischievous, frolicsome warm sunny days arrive to tickle their fancy they are suddenly, coquettishly deceived, and all thoughts of virility and bravura are abandoned as they begin overnight to flaunt and shimmy in a way that is well, quite shameless. It is a remarkable transformation, much like the cross-dressing that often goes on at the Rugby League end-of-season gala. Though it must be said, far prettier. 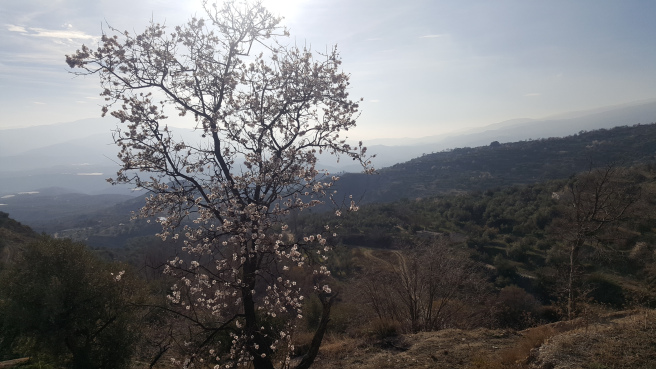 And so the snows are coming, and it begins once more, the annual petal-violation at the stony-hearted hands of the brutish winds of Winter…..

Of course it's all baloney. It's not as if the trees can exercise much choice, at least without an extended period of evolution. They, together with much else, are the incontestable victims of climate change, and are not so much consciously out-foxed as simply confused. The farmers suffer too: it breaks your heart to watch as after the storms the growers move tenderly along the rows of ravished branches, examining what's left of the buds for the dreaded black patches that show up after freezing.

Likewise the bees. Often as not the almonds are the only trees in bloom at the start of the year, and numberless insects take advantage of their Kamikazi-like attitudes and generosity: just stand still and you can hear across the terraces the dull throbbing of millions of pollen-laden bees. What happens then, to the bees, once the blossom blows away? I'm not sure I want to know the answer.

But despite all this, despite the torment of the trees, the bees, and the farmers, the sight is nonetheless magnificent. Whole mountainsides seem to explode with fluffy white buckshot, the air is thick with weightless slivers of white and pink, and the arid ground is cloaked for a time in milk-coloured loveliness.

It is, you could say, the confetti of the Gods. An Ancient Greek might have told you that it's sent to celebrate the Springtime union of Demeter and Zeus. Perhaps. A whimsical hippy might suggest it is to bless and glorify the fanciful marriage of Mother Nature to Mankind.

A nice thought too, if potty.

Trouble is, even if it were true, then with people like President Trump around, chances are that they – we – are heading for a messy divorce…. 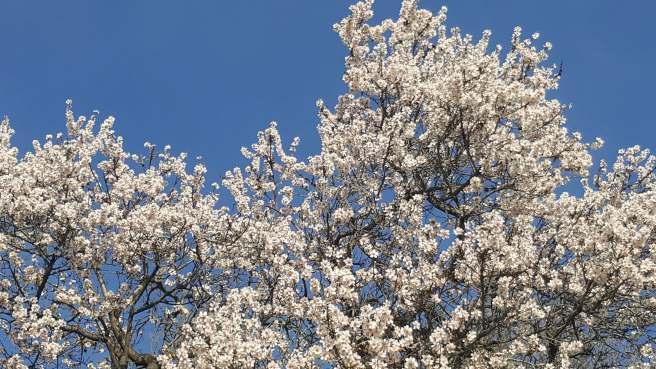