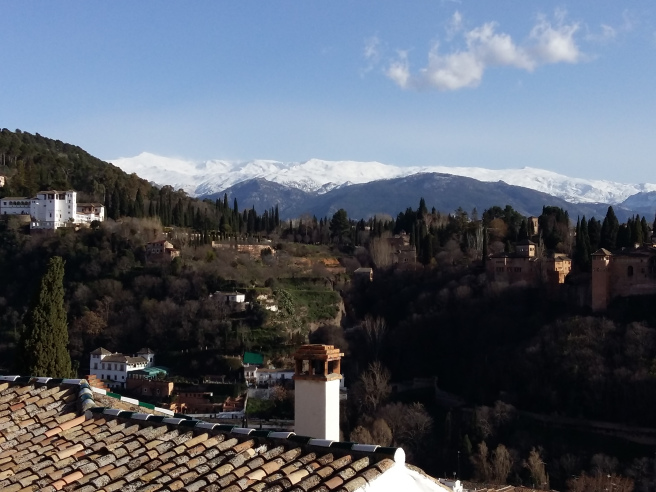 From time to time we now take little groups around the cities of Andalucia, and so there we were, having tried and failed by minutes to see the Monastery of San Jeronimo. That doesn't sound like much of a defeat , does it? Not to normal people anyway.

But you'd be wrong to think that, for in fact it's a place of huge serenity in the middle of a rambunctious city, and holds secretly within its confines one of the most jaw-dropping churches you're ever likely to see this side of the Pearly Gates. The uniformed, erm, gentleman who had refused us entry seemed visibly pleased to have darkened our day, so I was keen to hide my disappointment, and this in the end proved easy enough, for Granada, you see, is chock full of delights, so as one door closed, another opened.

The crypt beneath the Cathedral made for a good Plan B. B as in bling, perhaps, for the whole place is saturated with enough gold and silver to sink a battleship. (It did, in fact, often – just last year the San Jose was discovered on the floor of the Caribbean with 15 billion dollars worth!). There is little sense of restraint, discretion or finesse here, just this amazing in-your-face attack on the senses, artistic and spiritual, with plenty of 18+ imagery from the Old Testament of boilings-in-oil and decapitations to discourage the would-be sinner . It's wonderful.

It's the permanent resting place of Isabelle and Ferdinand, of course, the undisputed Masters of the World at the time, so they could afford to be flamboyant. Did you know that to this day every living European Royal is a direct descendant of this rather fertile pair? With a bloodline and connections like that there's just no need to do under-statement. It was also very much an architectural response to the glories and harmony of Islam, in that anything-you- can-do- we can do better kind of way, though gilded, with knobs on, literally

That's why Granada is such a gloriously fascinating city. Musically, imagine J.S. Bach and Freddie Mercury showing up at the same gig and you'll get some idea of the contrast . At the foot of the hill the mediaeval city is all self-promotional baroque spangly tight-trousers , whilst the Alhambra at the top is an audacious Moorish fugue of botanics, arches and decoration. And between the two a range of noble, cloistered buildings home to any number of convents, monasteries and gran familias.

An intriguing way to fend off hunger pangs as you stroll around the old town is to pick up a quick snack at one of the convents. Seriously. The story goes that each of the various orders is forbidden very specific foodstuffs, so that group A, for example, must go without egg whites, and will therefore make – and sell – meringues, whilst the members of B, deprived of yolks, do the same with a particular sponge cake. So, when you come across a little wooden door on the side of the chapel, you can push a button and hey presto! a disembodied voice from within the severe old walls asks you to place your order. The little door opens and yes, miraculously, there is the cake of your choice. We could of course have done a runner at this point, but the immortal soul being more than ordinarily at stake we thought better of it. It's a brilliant way to buy food though, half way between a confessional box and a Macdonald's Drive thru', though the bun in question did have a rather ecclesiastical after-taste, shall we say; I could imagine it had been kneaded on a pew. For the record it was a cup cake, or Magdalena, as they say here. I thought this appropriate to the point of sale. 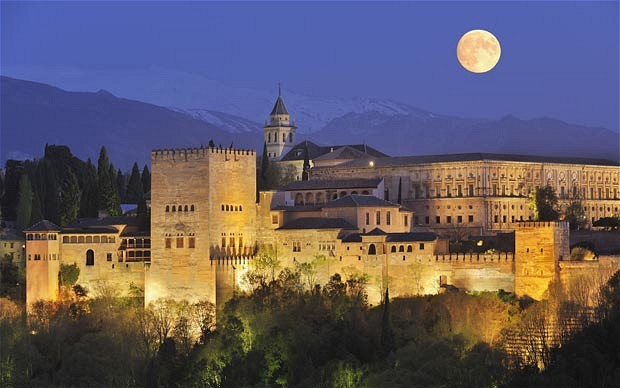 Much later, suitably attired against the night time chill, we found ourselves standing in the modest queue for the visita nocturna to the Nasrid Palaces at the Alhambra, perhaps rather pale, dreamy and blue-lipped in the light of a glorious full moon. And what a prodigiously romantic setting this is, all marble and fountains, our senses stunned by the perfume of orange blossom, with glimpses through lacework arches of snow –topped mountains beyond, as delicate and flouncy and quintessentially foreign as you'd expect if you'd read the 1001 Nights. Think of the Downton Abbey of Arabia and you'll start to get the picture.

Tell you what though: the otherwise beguiling atmosphere is not improved by the constant flashing of so many cameras. Everyone is at it, and the effect is literally dazzling. Me included, I confess. Suddenly, we're all amateur papparazi, clicking away for dear life. Imagine, say, the effect were the Beckhams and the Clooneys to stroll together down the High Street, with their kit off. It's a bit like that, though this time we're shooting lion. Marble ones. Moreover, clean ones, for they, the celebrated feline inhabitants of the eponymous Patio de los Leones, are now back in their enclosure after a spell at the lion cleaners, which one might suppose is a fairly niche market. 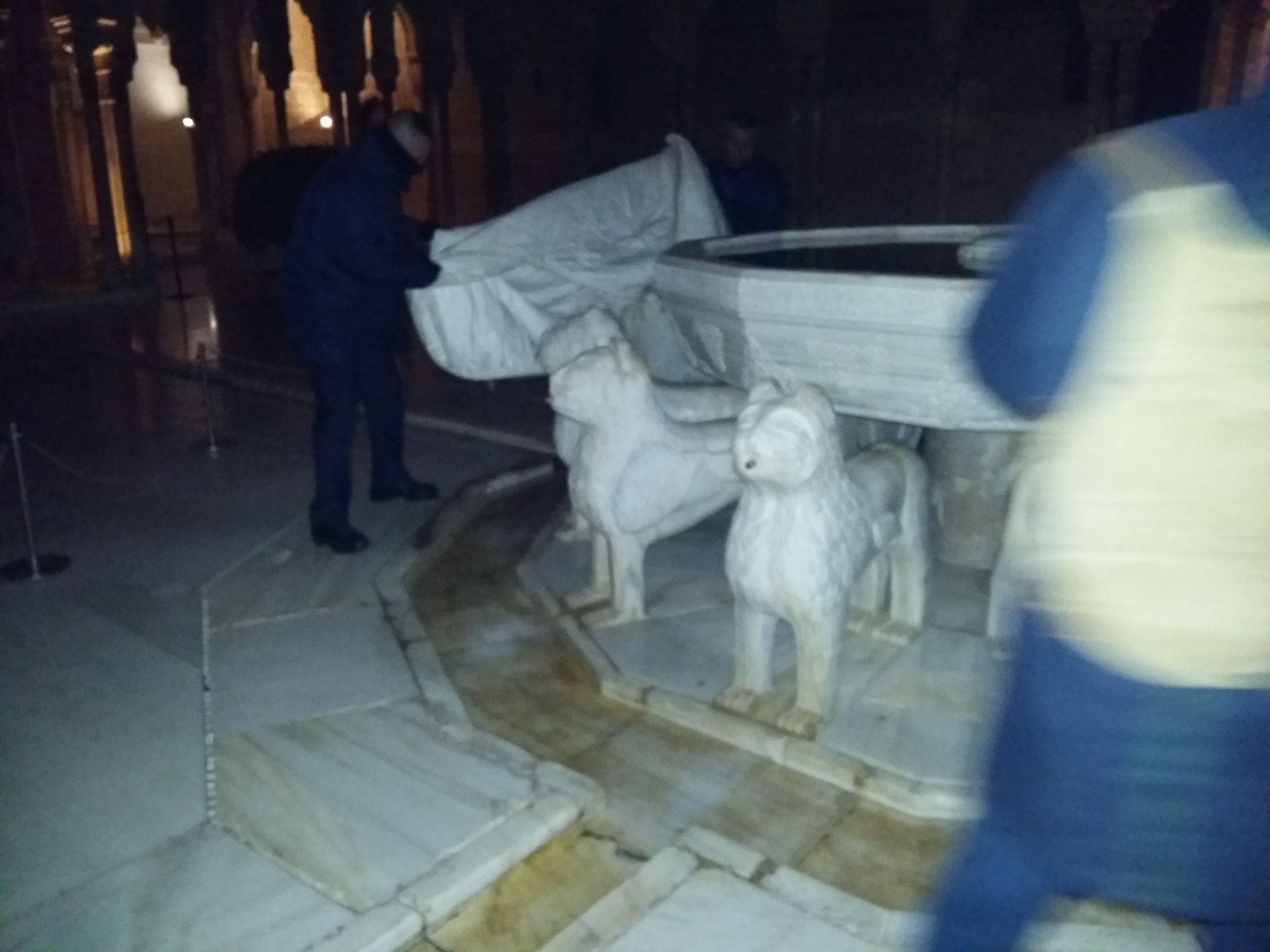 And the loveliest thing? At night they cover them with duvets, bless ‘em. Seriously, and if ever you were looking for a metaphor to describe just how sweet, baffling, beguiling and bonkers is the city of Granada, then you might find some clue in this oddball bed time ceremony . I wonder if there is someone there to murmur a soft lullaby to them…….. it wouldn't surprise me. 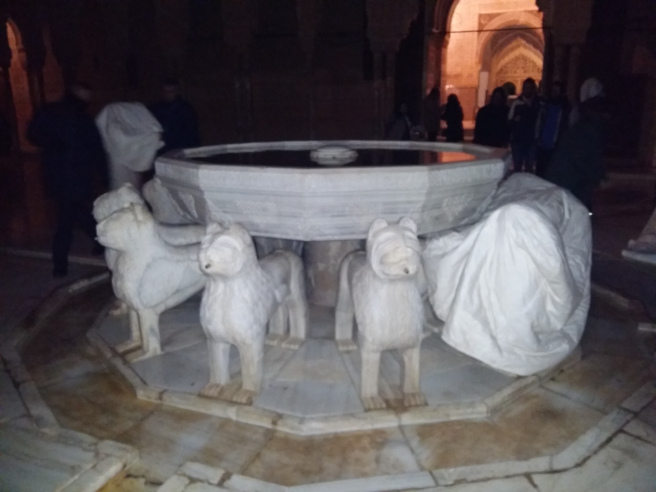